Robert Hudson
Robert “Bob” Hudson of Albany, Oregon passed away peacefully at home on April 1st, 2019, surrounded by loved ones after a long, courageous battle with glioblastoma.
Bob was born on October 23, 1968 to Hubert Hudson and Kathleen Zenger. Bob joined the Navy when he was 17 years old and proudly served his country until 1990 on the USS Mount Vernon.
Bob met the love of his life, Bonnie McEllhenney in 2007. They were happily married August 7th, 2010. Bob never missed a morning of telling his wife “Good morning beautiful”. Bob loved the Navy, fishing, hiking and his family. He enjoyed being active and outdoors as much as possible. Anyone that knew Bob, knew that he was a man of few words, but his smile always lit up a room. Bob had a way of making people feel special and made sure to put others first. Recently, Bob was given the opportunity to check some things off his list and travel before his passing. He met his grandson Wyatt in person for the first time, went to Washington DC, explored Yellowstone and went on a whale watching boat. He never gave up his strength or smile.
Bob is survived by the love of his life, Bonnie, his sons US Navy Petty Officer Third Class Wesley Hudson and wife Summer of Virginia, Justin and wife Alexys of Albany, Jeremy and wife Kelli of Albany, mother Kathy Zenger and her husband Frank of Hillsboro, father Hubert Hudson of Oregon City, stepmother Robin Hudson of Lake Oswego, sister Laura Hudson of Oregon City, brother Mike Hudson and wife Kelly of Beaverton, stepsiblings Katie, Kevin, Karen and Krissy, 9 grandchildren, and several beloved nieces and nephews.
He is proceeded in death by his beloved grandparents Joseph and Loretta Duffy, Clifford Hudson and Hazel (Winchester) Lowrie.
There will be no funeral as Bob did not wish to have one but there will be a Military Honors Ceremony at the American Legion Post 10 in Albany on Friday, April 12th, 2019 from 1-4pm, with full honors taking place at 1:15pm. A celebration of life will be held at a later date, where Bob will be set out to sea by the Navy he was so proud to serve.
In lieu of flowers, the family asks for donations to be made in Bob’s name to the American Brain Tumor Association for brain cancer research.
“No more a Watch to stand, Old Sailor. For you are drifting on an ebbing tide. Eight Bells has rung. Dog Watch is done. A new Berth waits you on the other side.
Your Ship is anchored in God’s Harbor. And though his sailors are of equal rank, there’ll be Shipmates on the deck to greet you. And Pipe, as you ascend the Plank.
Her boilers with full head of steam. Cargo stowed and Galley stored. Just waiting to get underway. When the last Hand comes aboard.
Look Sharp! That Hand is you, old Sailor. And you’ll be sailing out on Heavenly Seas. So may the wind be ever at your back. Fair weather. And God speed.”
You are relieved of your duties now Seamen, we will take it from here. Rest easy. 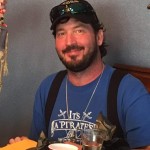 Preserve the memories and special thoughts shared
by friends and loved ones with a Memory Book.